Hey, 90’s kids! I’ve got a must do for you when traveling to San Francisco. You need to go from the Bay to Full House! I know, they didn’t really film in that house, but the iconic front is all the things for us kids who grew up in the 90’s, am I right?

How to Climb from the Bay to Full House

Yes, I said climb from the Bay to Full House. There is no judgement if you just Uber over (unless you’re brand new to Uber and you don’t sign up to ride with my link and save yourself some money, ahem) because San Francisco is full of hills.  I had been two times before I took on this adventure and I admittedly thought the city was just one big hill – nope, it is rolling steep hills. But if you are adventurous like me, you’ll want to get down to the Bay then climb up to Full House. It will be fulfilling, I promise!

Starting by the Bay, you’ll want to be about halfway between Ghiradelli Square and the Golden Gate Bridge, actually right in the middle of Yacht Harbor! There you will find Broderick Street which goes straight up a hill back toward the city and is the street where you will find the house that was used as the front doorstep of Full House.

It’s about one mile and yes, it is all up-hill. I took this hill on right after I ran ten miles including the Golden Gate, so I might be about to exaggerate how steep it is, but it is worth knowing how I felt with strong legs because you need to be prepared. If you are a sweater like me, do it in workout clothes (you’ll thank me). And no matter who you are, wear your sneakers. If you haven’t noticed, my sneakers of choice are New Balance 880gb7‘s which you can find at a nice price on Amazon!

My walk up Broderick started with a video chat home to my kids. I was panting but doing okay. After 3 blocks, I had to be honest with them and tell them good night – time for mom to climb some hills! About 0.6 miles into the walk, you’re going to come to a place where Broderick turns slightly to the left but isn’t actually a road for a block. This is where it gets real. The sidewalk is steep as all get out but so worth the burn if you are feeling up to it. Seriously, here it is from my view:

I felt pretty accomplished after getting to the top of that hill and now I see on Google Maps that it is actually a “View Point” – well no wonder! I didn’t take the time to look but I had to do a selfie to prove I was able to climb from the Bay to Full House! 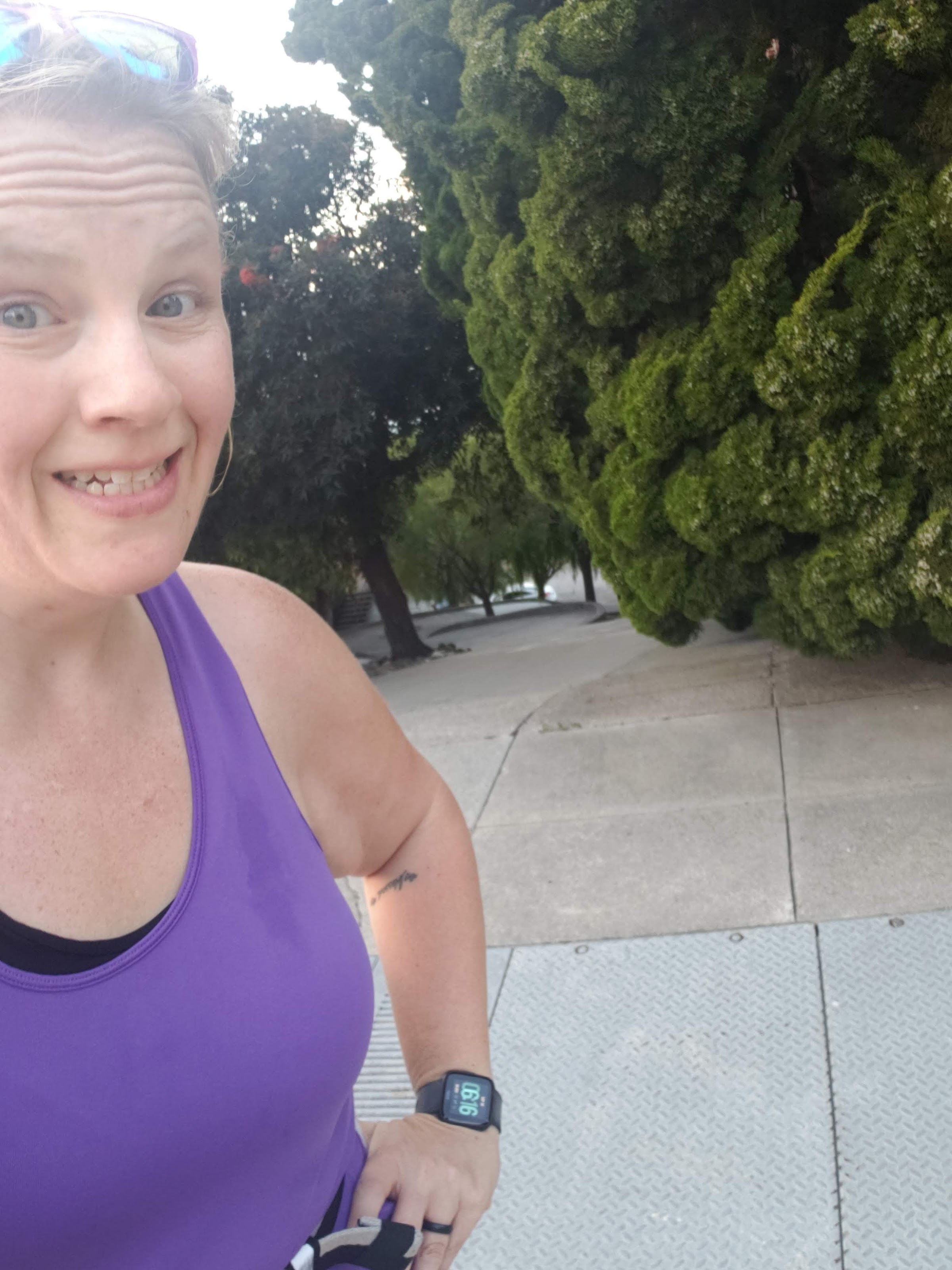 But wait, you aren’t there yet.

Finding Full House and What to Do When You Get There

I’m not going to give you the exact address of the house because well, one you can see it here but two it is someone’s (ok, the producer’s) private residence and I’m not all about linking addresses here on my page. Don’t make them say, “How Rude!”! Once you climb the hill, you’ll start downhill. I recommend approaching the 1700 block of Broderick on the left so you can get a view like this (especially as the sun is setting!) : 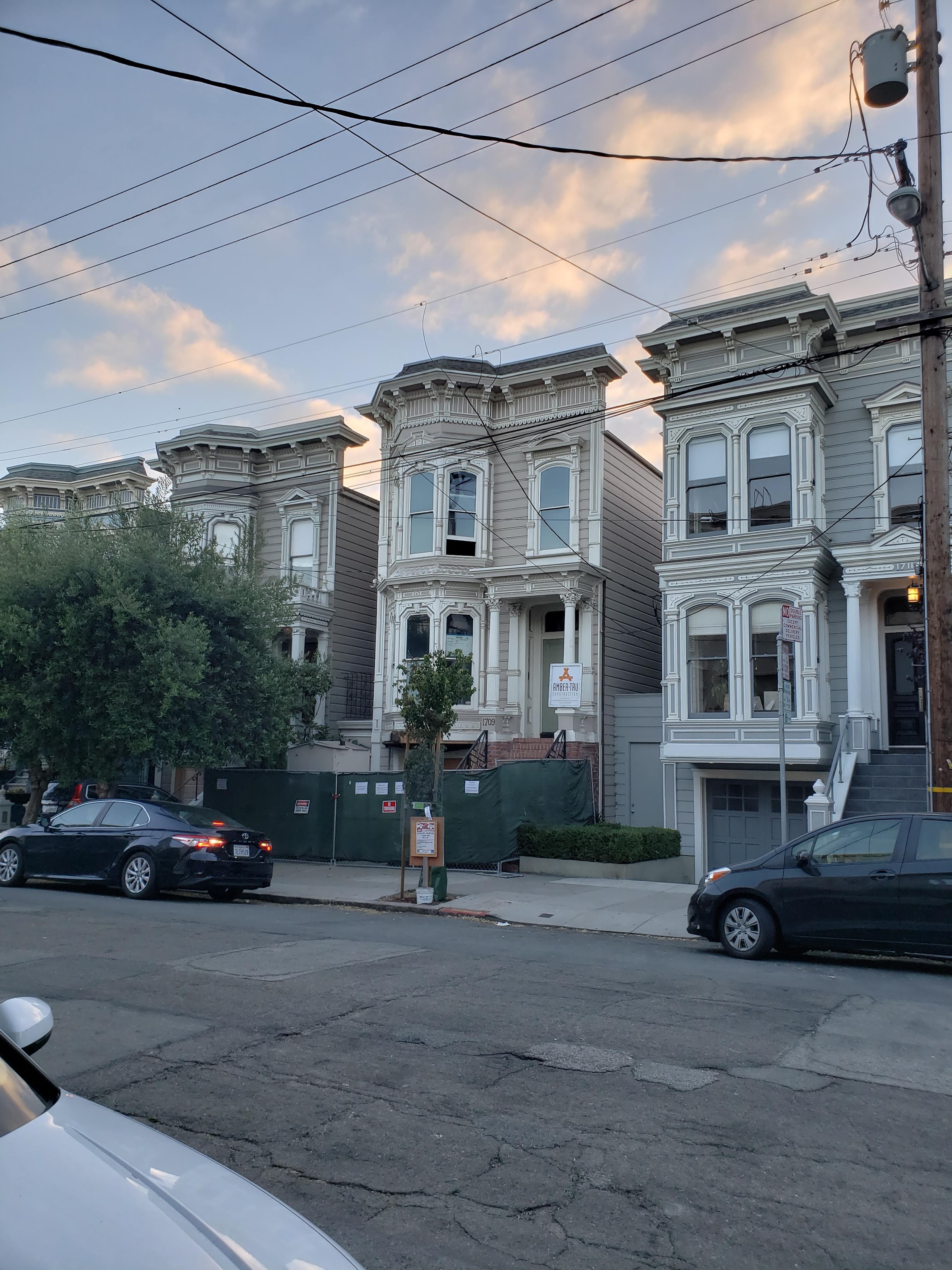 Do you remember the doors were actually red? As of the end of September 2018, there is construction going on, including painting the doors a light green. Do you notice those signs and construction fencing? Obey them and be kind. No, you can’t sit on the steps right now. I felt a little underwhelmed at first but then thought about how we’d feel if people were always on our porch and I get it. And the neighbors – they don’t need you to be a nuisance. Take a selfie, take a photo for others who have stopped by too (because they will) then move on and take an Uber back to your hotel or a Starbucks for a pumpkin spice frap blended. You earned it. (Mine was less than a mile away and I did it, yes the uber and the frap!)

What iconic landmarks or buildings are on your travel must list?

This week of training included a huge win on my running bucket list. I was away for a work conference and I got the chance of a lifetime to run Golden Gate Bridge! I needed to do a ten-mile long run this week and would be on an airplane on my normal running day, so I made this one work in my favor. Read on for an update on how things are going as I train for the Myrtle Beach Mini Marathon on October 21, 2018. (This post contains affiliate links, I earn a small commission at no extra cost to you when you opt to buy through my links.)

On Monday, I boarded a plane bound for San Francisco and Dreamforce, which meant I wouldn’t get in my five miles but still had lots of time walking in airports and pacing waiting to get into my hotel.

Tuesday 9/25: Hotel Gym WOD – 1-mile treadmill at 11’10″/mile, bike for 4 miles, 0.5 miles elliptical, ab work.  I was staying on Nob Hill but needed to work out at 5 AM for a jam-packed day. When I realized the area wasn’t as safe as I’d have liked for an early morning five miles, I hit the gym. At first I had it to myself but then it started to get busy and I had to keep switching machines to allow others a chance to get their morning miles in, too. 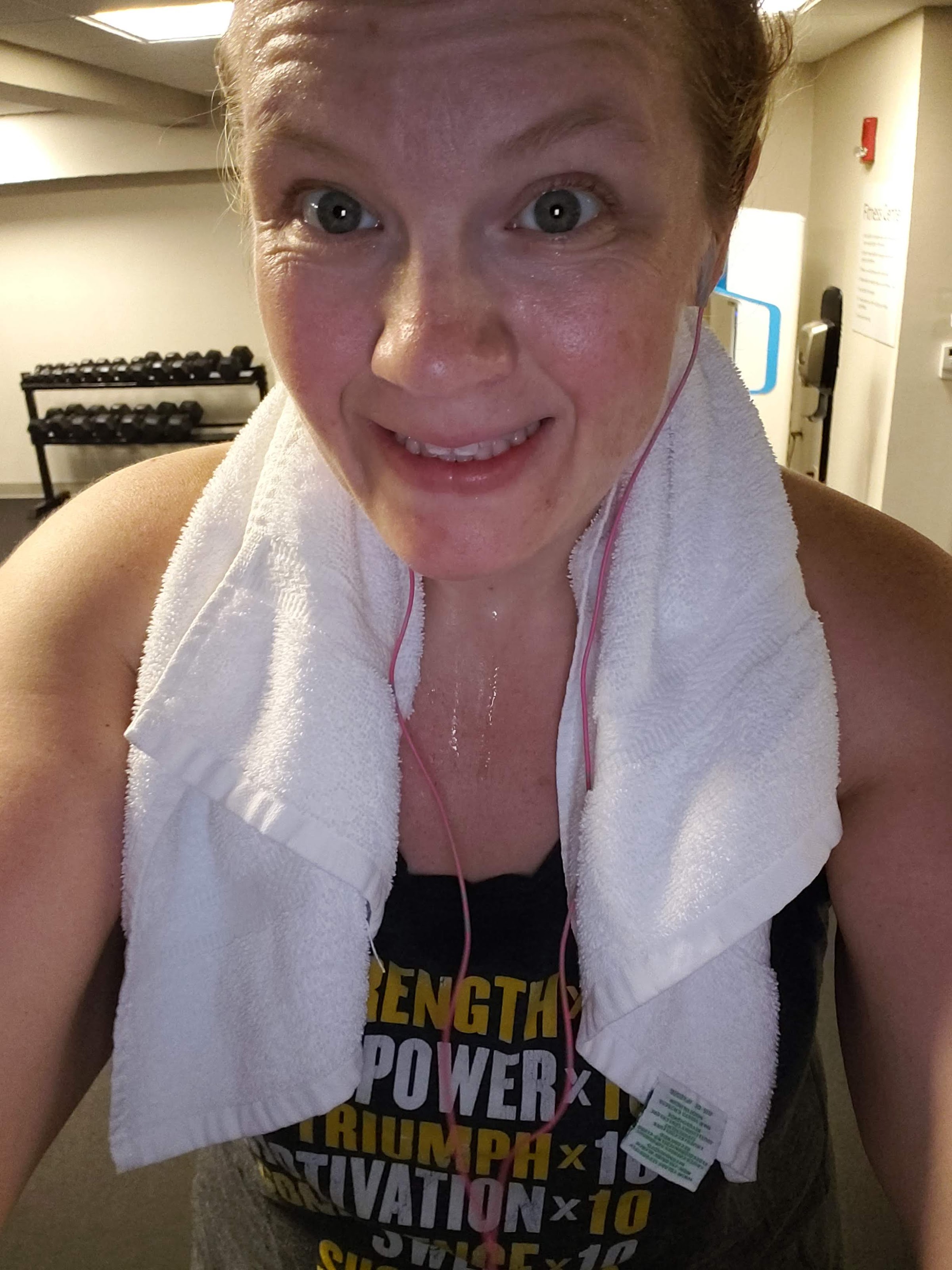 Wednesday 9/25: 3.1 miles, 10’46″/mile Another early morning run, but this time I was meeting up with a bunch of runners in the Fit for Dreamforce challenge. We set out on the Embarcadero to do a 5k loop which included passing by AT&T Park. It was a glorious morning – I wore my Pittsburgh Marathon long sleeve and didn’t sweat too much – and amazing to watch the sun come up over the bay. 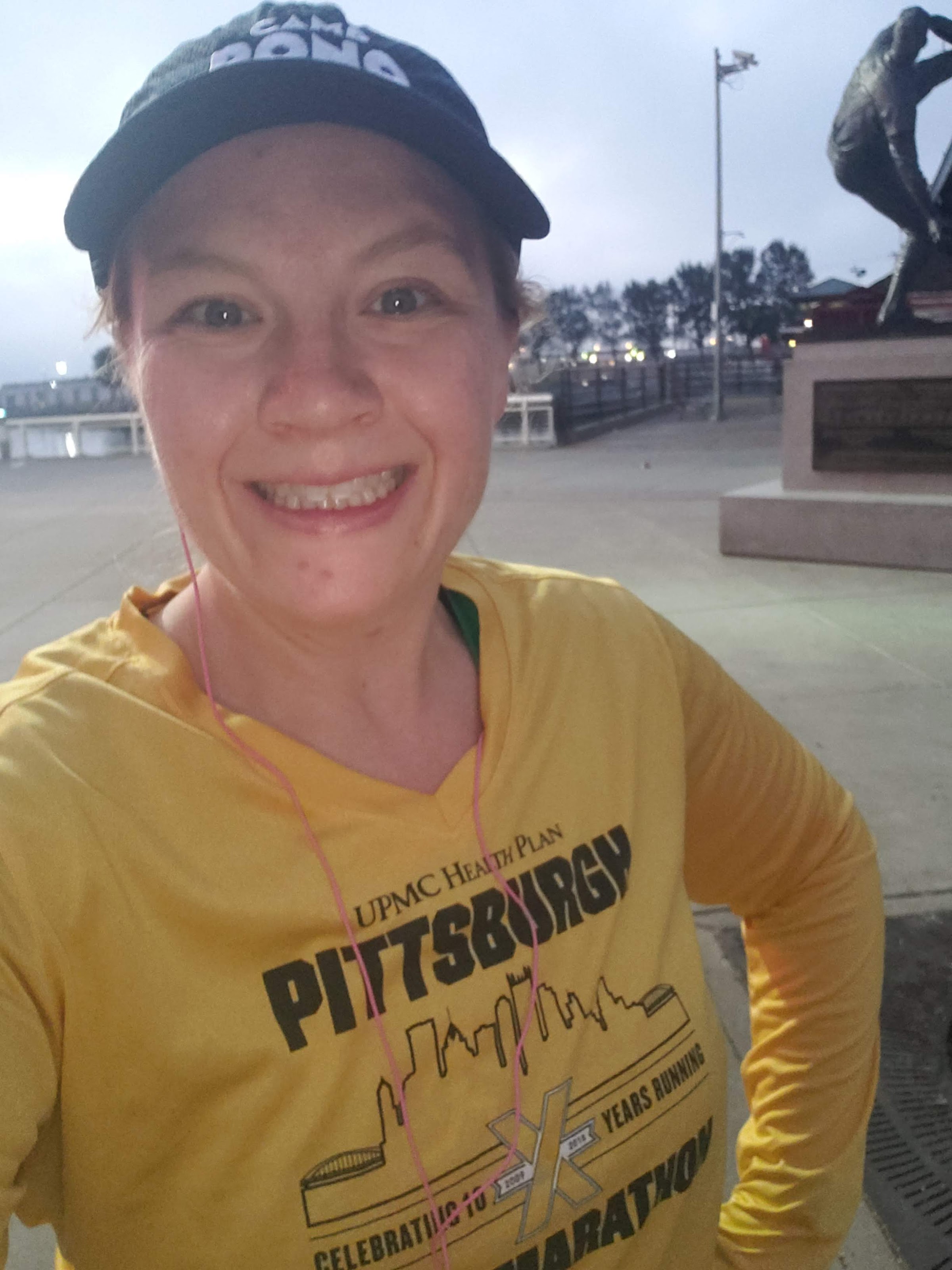 The days were incredibly busy with lots of steps, learning, eating, and networking. I am not going to the mental place of checking out the scale but I think my losses while doing intermittent fasting are probably a waste. Thing is? I had a really good time and ate fresh foods, gluten-free treats, and just spoiled myself a little more than usual. I knew what was up ahead!

By the time the week ended, I was about 15 thousand steps shy of 100k and still needed to get my 10-mile run in. I’d done a little bit of research on how to run the Golden Gate Bridge but wasn’t 100% confident I’d actually have the guts or wits to do it.

My hotel was at the top of Nob Hill in San Francisco, so I decided to run from it to the Bay. That first mile was a super quick mile because it was all downhill. Once I got to the Bay I was stunned at the beauty of the day. We’d had temps in the 50’s all week but it was about 63 when I set out just before 4:00. Greg was keeping the kids awake until they heard how I did, so that put some pressure on me to stop staring at the bay and get toward that bridge!

Once you get to the Bay (or if you start near AT&T Park along the Embarcadero), you basically have a straight shot along the bay to the Golden Gate Bridge. It is incredibly simple, just keep following the sidewalk and the water and the signs like this: But when you see this particular sign? Take the left. There was still a slope and I’m not sure what the right involved!

I’d started near Fisherman’s Wharf and got to run through a park by Fort Mason, saved a soccer ball from getting run over by a car, watched some people doing CrossFit at a Fitness station along the path, and saw tons of gorgeous boats in Yacht Harbor. After that, the path turned into a sandy surface and I had to slow things down. It was totally God’s way of telling me to enjoy what I was running past in Crissy Field.

At the end of the field, you come to Torpedo Wharf and the Warming Hut. There you will want to take some steps up to the Battery E Trail. I paused my run tracker and just enjoyed the beauty of the walk up the stairs because seriously, how gorgeous! 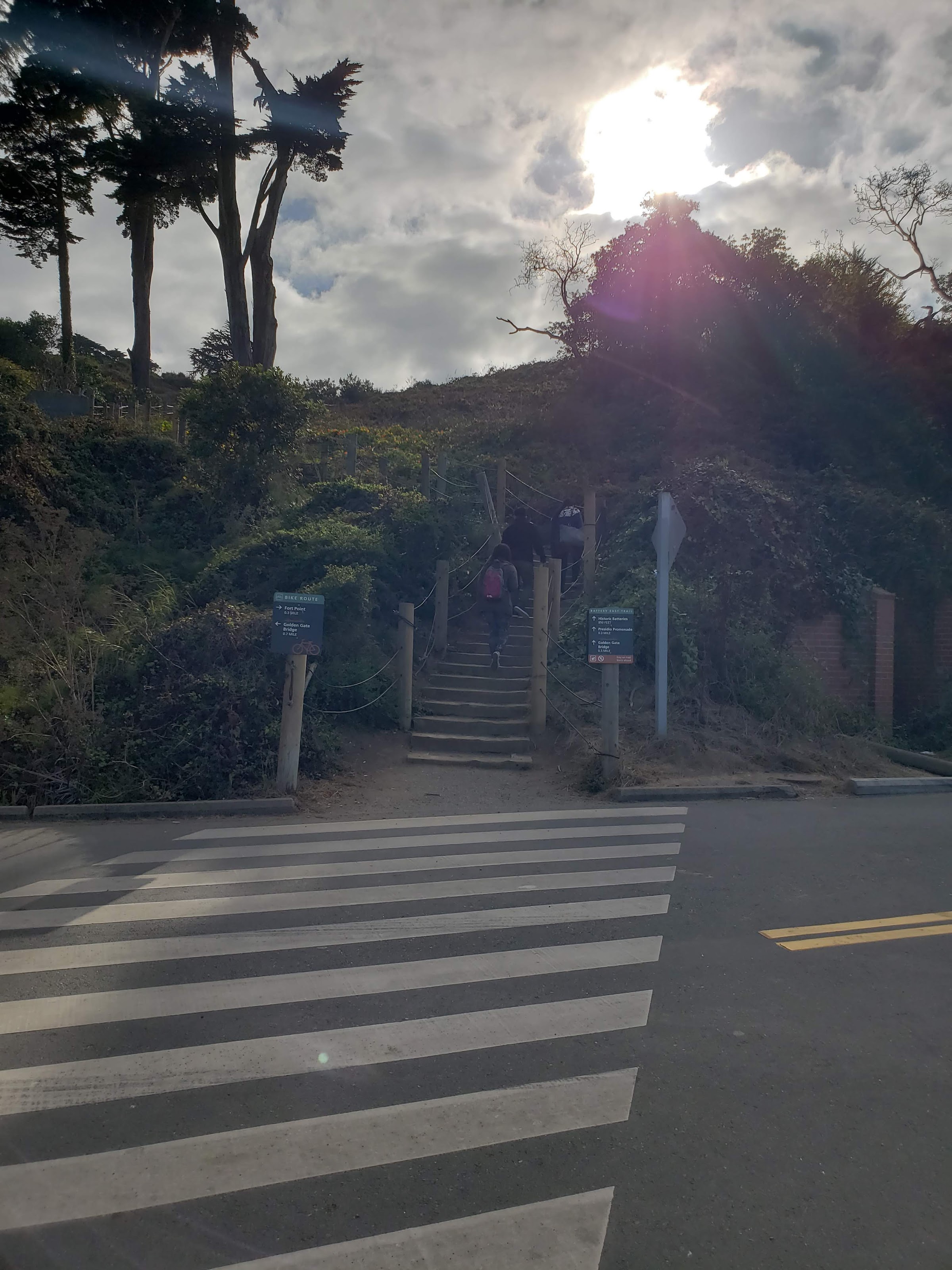 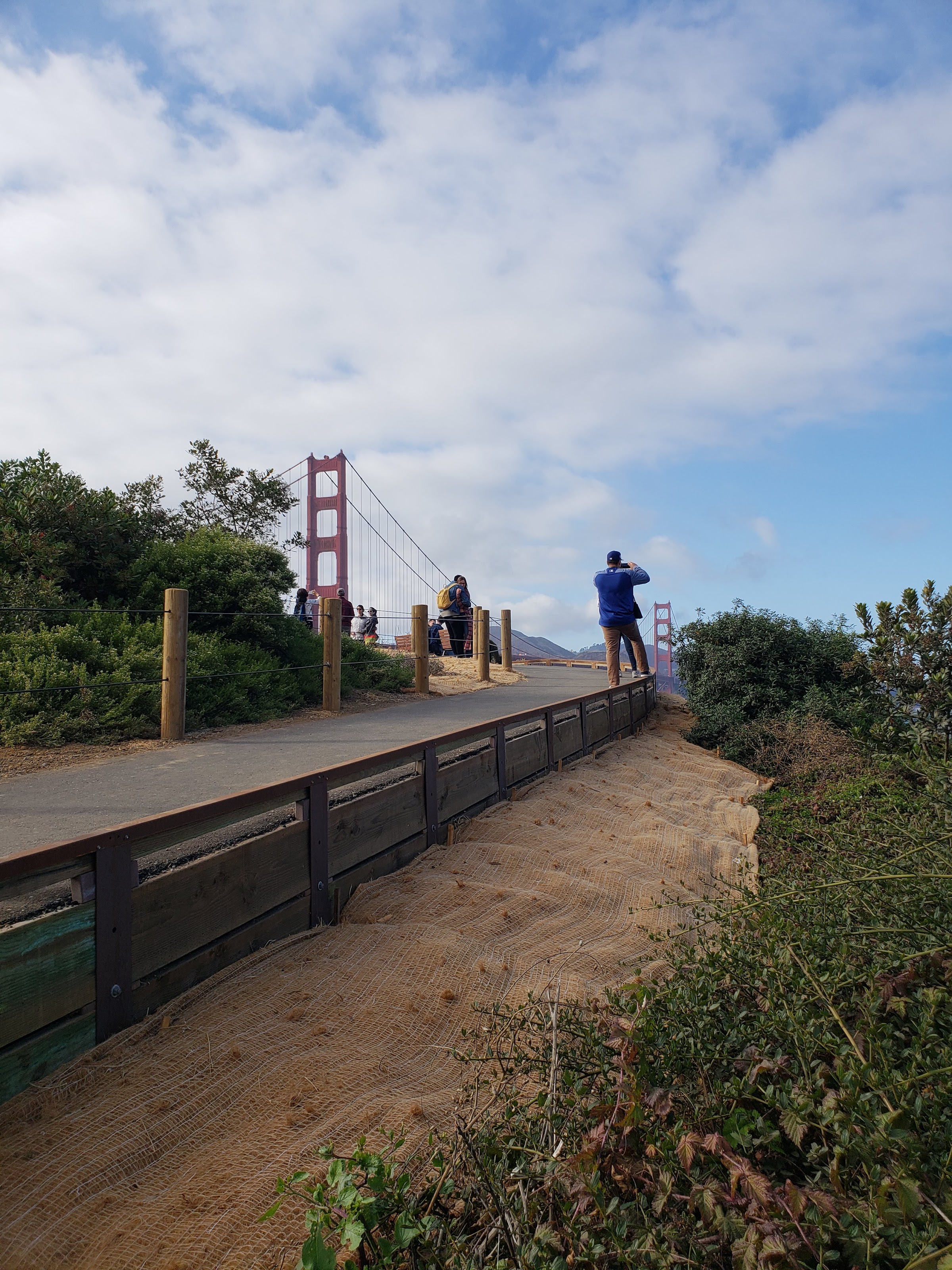 Once you’re to the top of the stairs, that path starts winding uphill and you pass the Welcome Center. Depending on the time of day, signs will guide you to which side of the bridge you’ll need to go on if you are a biker or pedestrian. As it was after 3 PM, I was sent to the Bayside but could taste the salt in my hair as it whipped into my mouth (the wind is no joke up there!).

The chance to run Golden Gate Bridge is something I totally recommend. I was in awe the entire 1.7 miles out and 1.7 miles back. There were some videos I made while running that I sent to Greg and the kids and a photo montage I posted on Instagram. There really are no words to describe it other than there was no doubt in my mind that God created all the beauty that was around me – even the tourists paying no attention as they walked in packs of five and six wide across the bridge (ha).

The remainder of my ten flew by as I headed back toward my hotel. I ended near Broderick Street which is the house the famed “Full House” house is on and decided “what’s another mile’s walk uphill to see it?”. I crawled at one point because it is so steep but I made it to the top and to see the house before sunset. Bucket list x2! 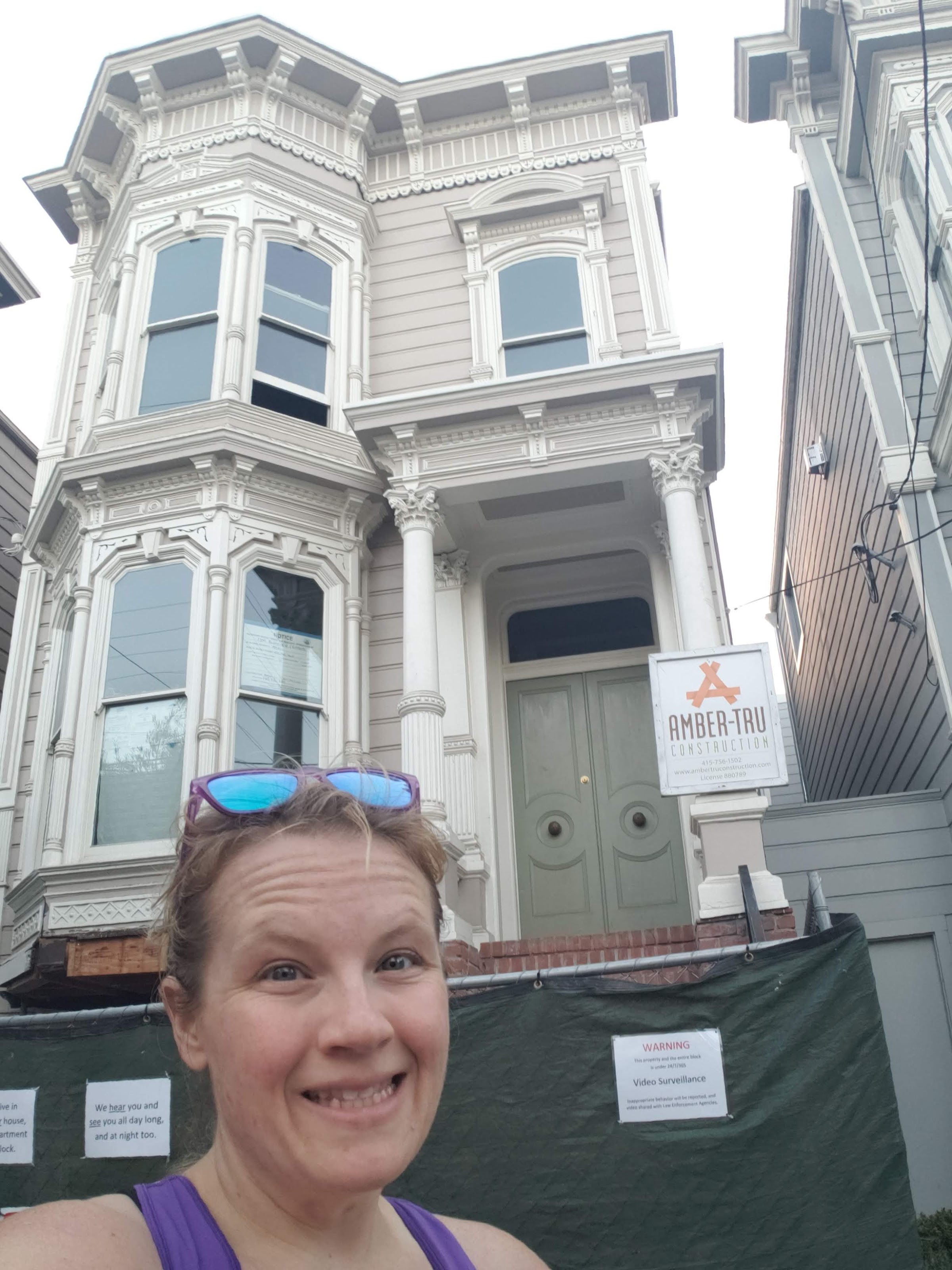 Stay tuned to see what the next weeks (three left!) bring or check out past posts from this training cycle.