I will be the first to admit that I am not the “mommingest” mom. My hubby is pretty incredible at his side of our parenting game and doesn’t seem to get as worked up as I do having four kids and a job. That’s why I spent this past weekend away from the mom duties. I momfess, I needed a mom time away.

The trip wasn’t intricately planned, just a stay at our timeshare and a visit to Busch Gardens (which I will talk more about later), but my bestie and I enjoyed time mostly off our phones and treated ourselves. There was running for me, shopping, pizza eating, and a mani/pedi. It took all of five minutes on the road and I was relaxed and ready to just breathe.

And it took all of six minutes to miss the kids and Greg, but in the same breath I remembered that I am me first and if I am not the best me, I can’t be the best for them. This was a great time to refresh and reset before a busy fall season. Mission accomplished.

I was provided with a review unit of the Fitbit Flyer in exchange for this post. All opinions are 100% my own.

As a runner, I’ve found I need some noise in my ears to keep the voices in my head from bringing me down. I wanted to check out the Fitbit Flyer to see if it was a viable option as part of my running kit and here’s what happened… 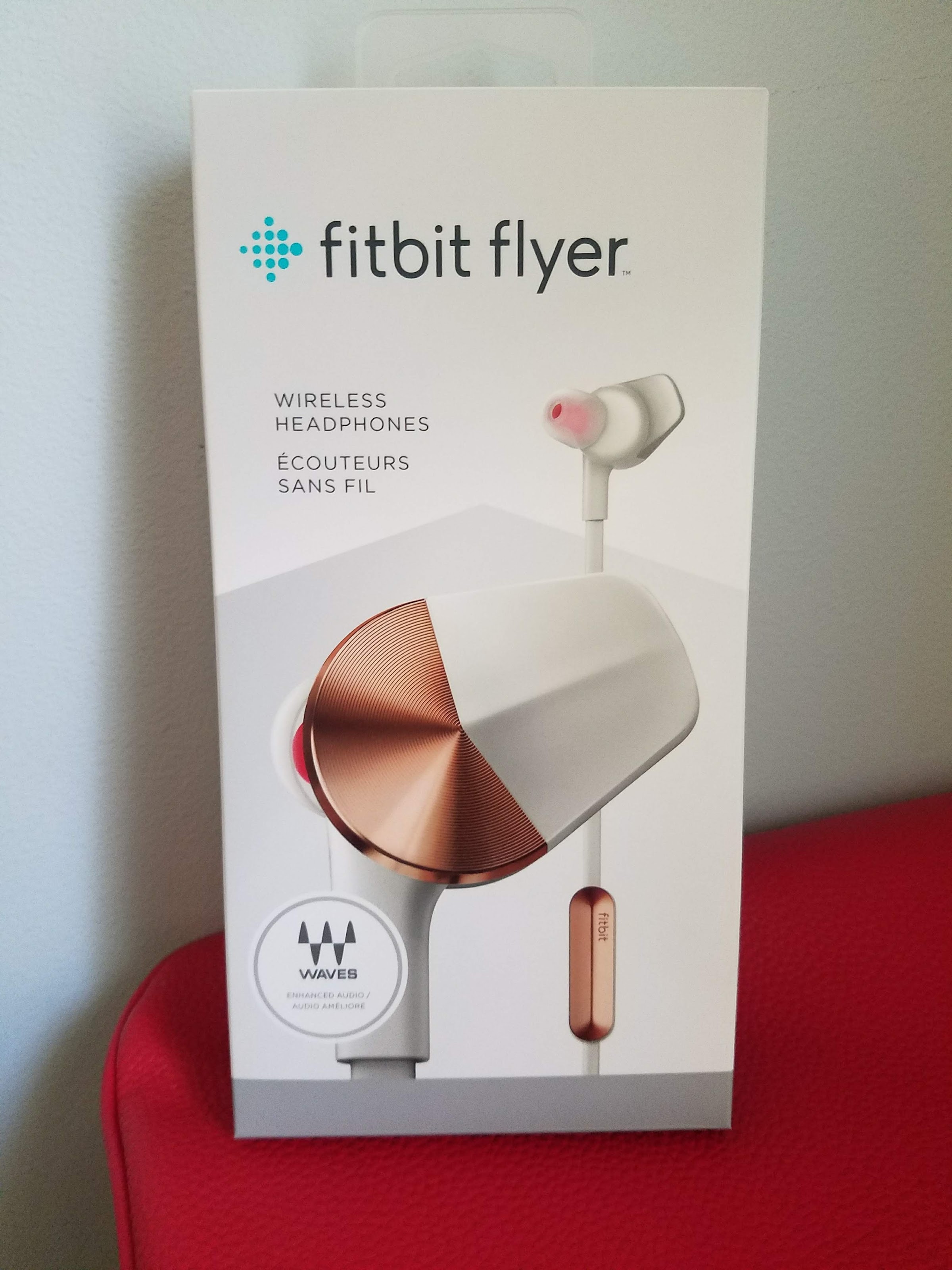 Before I tell you the “after”, I’m going to share the “before”. Because I’d already tried the JBL Free headphones from Verizon, I decided I wanted to compare them to a set that had some different features. On the sports and fitness page of Verizon, I found the Fitbit Flyer. 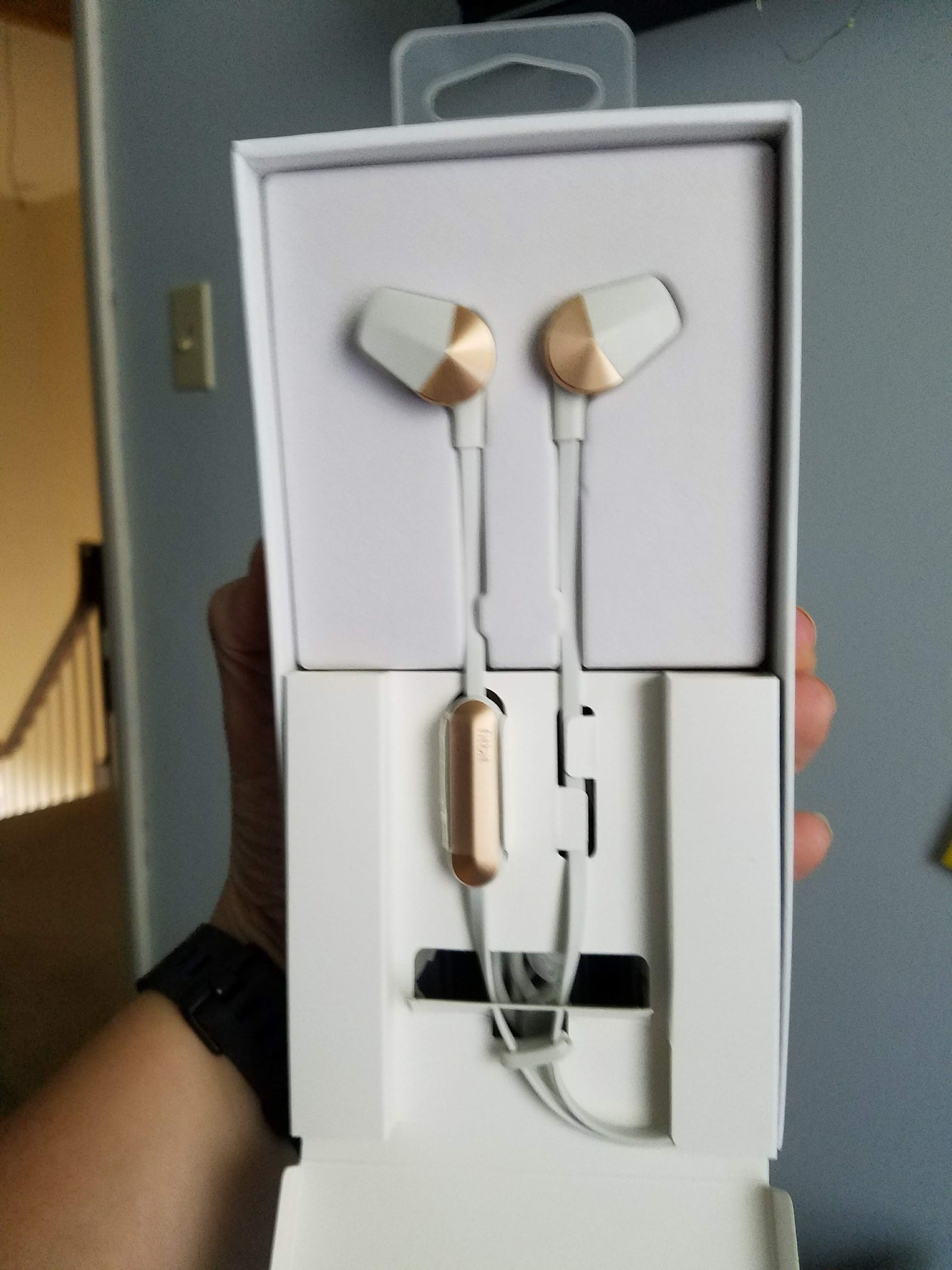 What I loved/Why I picked the Fitbit Flyer

My first day with the Fitbit Flyer was a rest day, so I charged it up and called Greg over a lunchtime walk. First, I was super bugged out – I could hear everything around me like it was in stereo! I hadn’t dialed him yet, just plugged them in my ears, but I was hearing things like the traffic on the street, people walking near me, and leaves blowing on the trees like it was right in my face. Once I dialed, those stereo sounds of the outside world went away and I was able to hear him super clear – and he could hear me just fine, too. When we were done chatting, I let them fall around my neck and finished my walk in silence (I think I was on noise sensory overload!). 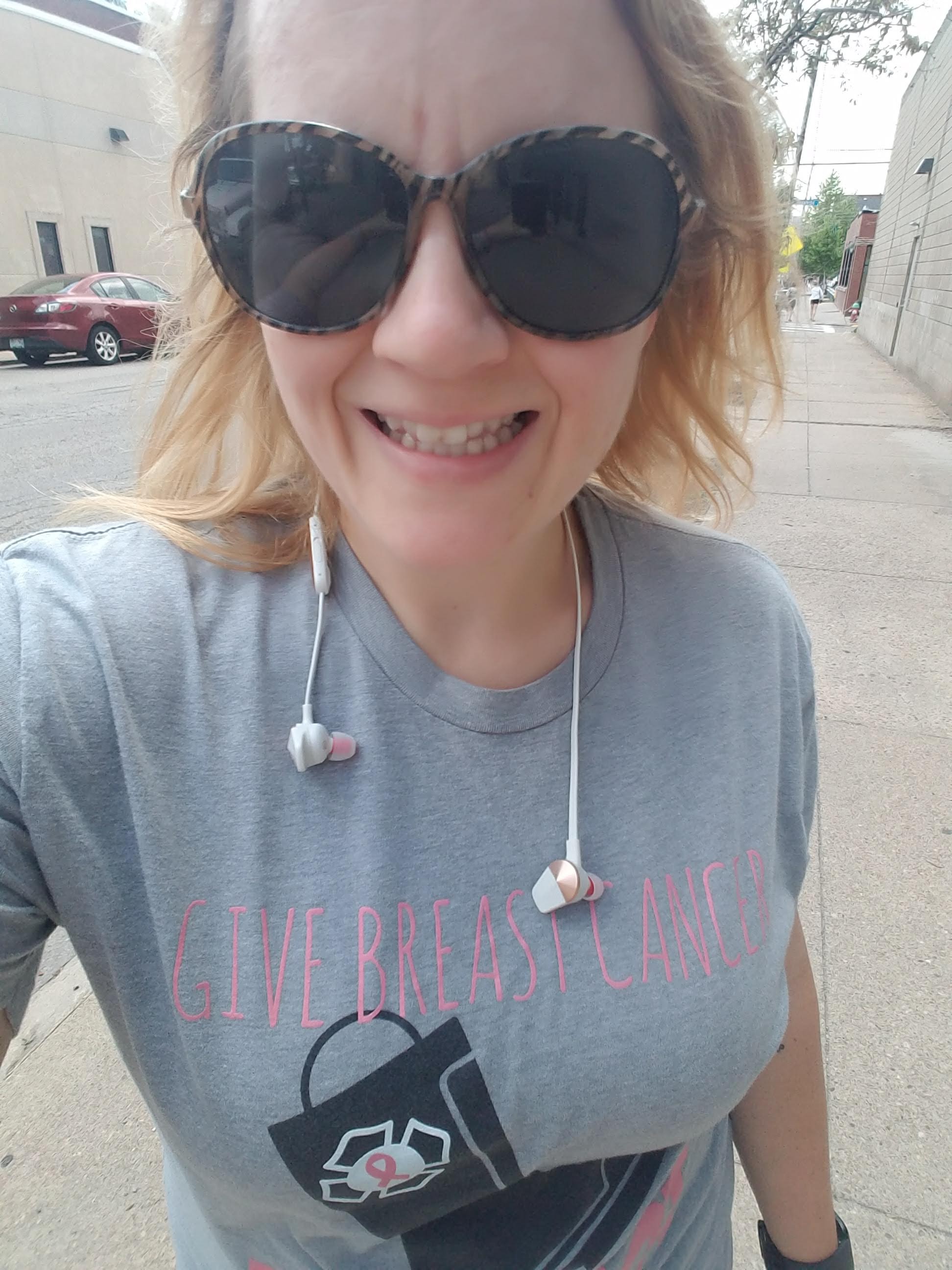 When I would run with the buds in my ears, I often found myself keeping one in at a time. Frankly, the noise it would pick up during silence was almost too much for me and I was a little scared at how little I could hear when the music was playing. It was almost “I can’t win”, so I’d wear one bud and tuck the other under my tank-top strap. 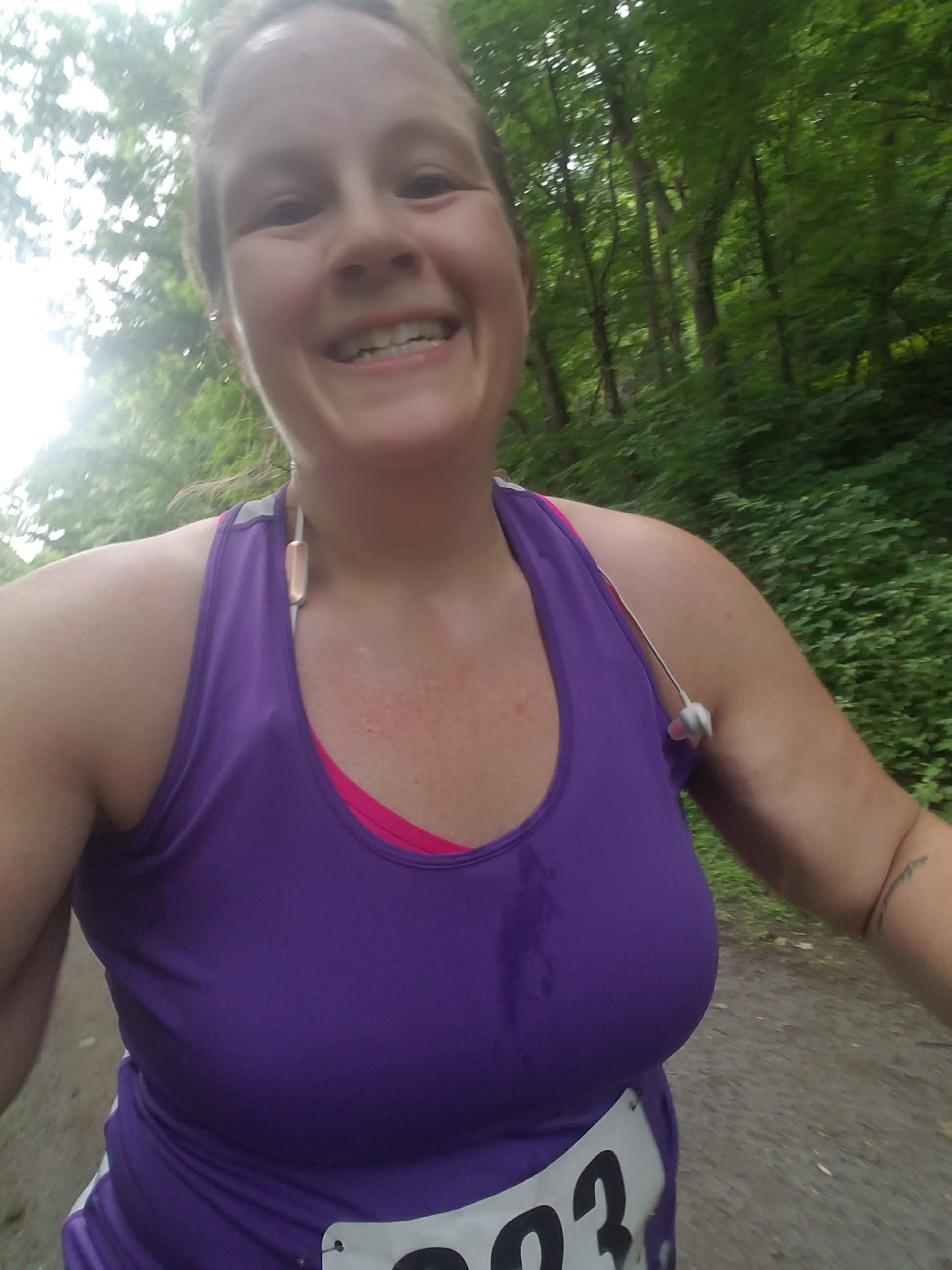 To be honest, I had the life scared out of me when I was wearing them in that photo above. You’ll notice both are out – one tucked and one flapping in the wind. I had just heard the growling on my 10k and decided to pull them for fear of what I’d heard. Eek!

But the logistics!!! They stayed in nicely, my ears must have been a perfect match so I didn’t mess with the wingtips or fins that come with the option to customize the size. I also like that when I was in the office I could pair to my computer to listen to my Spotify but keep the phone linked for accepting calls. That was super LEAN and a huge perk of these headphones.

So, what’s my final verdict? There were things that I liked but things I didn’t. For the price ($129.99 MSRP on Verizon), I’m not sure I would. They were nice to try and compare, but I’d say I give them a 4.0 out of 5 stars. You can shop on Verizon’s online store if you would like to try them yourself!

What is your go-to running headphone?

Verizon Tech provided me with products for the purpose of testing and sharing my experience. All opinions expressed in this race day bag post are 100% my own.

Technology is one of my weaknesses – I love checking out the latest and greatest gadgets that can make my life easier. When Verizon Tech shared with me some tips on technology for spring travel, I saw three items that I thought would be perfect to add to my race day bag when prepping for Pittsburgh Marathon weekend.

Last year, I don’t think Greg and I used gear check because my work had a tent at the Finish Line Festival. This year, our team is part of the Corporate Challenge, so we’ll be in the Hospitality Tent when the race is done. I hope to spend some time celebrating, getting a massage, and checking out what all is around the park this year, so we’ll be checking a bag with all the things that I want to have on hand.

Verizon Tech had some awesome gadgets that would be perfect for packing in a marathon race day bag: 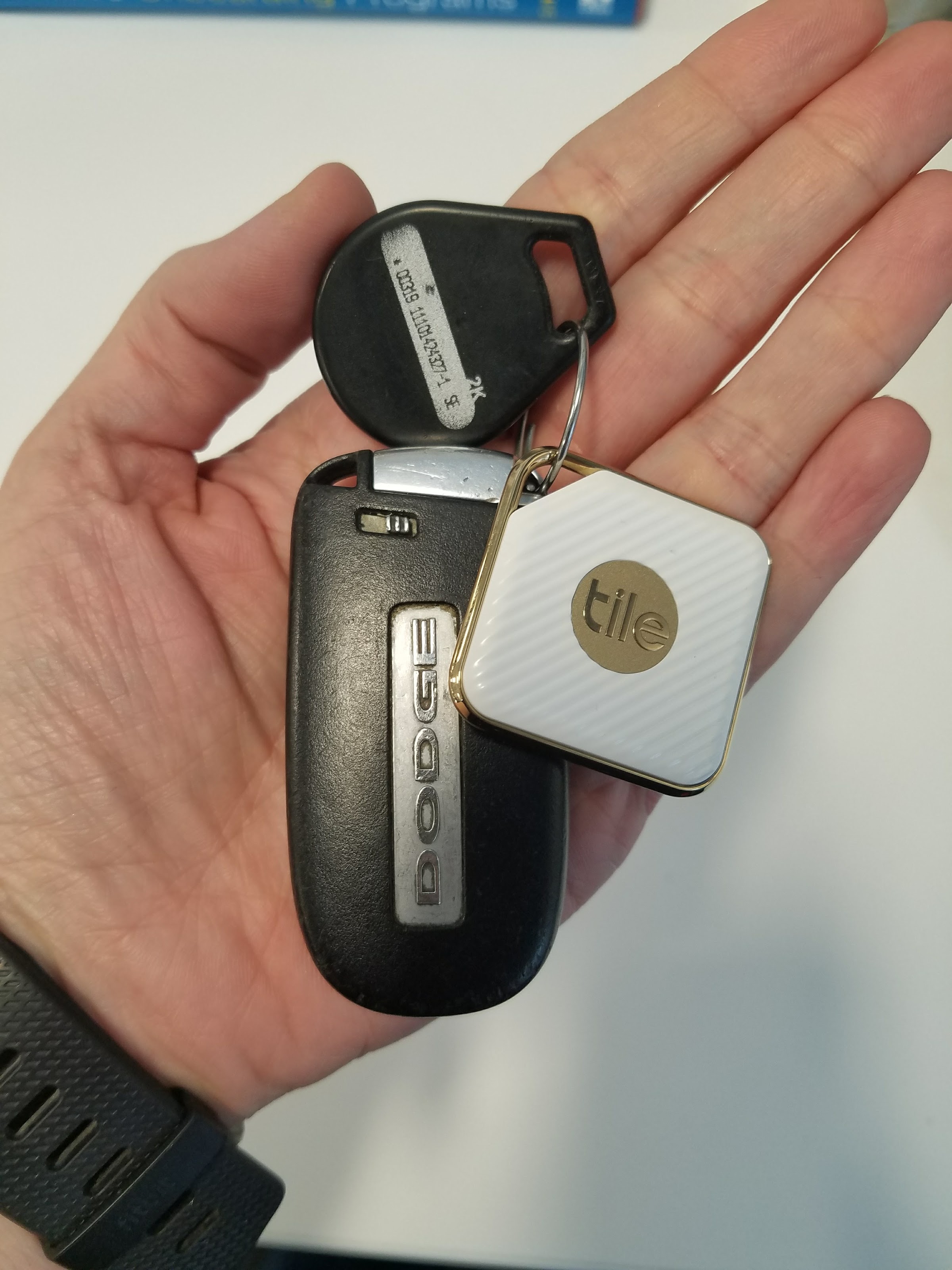 Tile Style – these stylish squares of technology are great for attaching to things you might lose (like your keys). I’m usually pretty good about knowing where my keys are, but I was thinking it might be good to toss one of these in the bag since it will go to Gear Check (which I trust, but you still never know).

When I was testing out this gadget, I happened to misplace my phone. A quick click of the tile icon and my phone started to make a noise – even though the sound was off! I’m intrigued at how these work without a charger and amazed at how easy they make finding all the lost things! 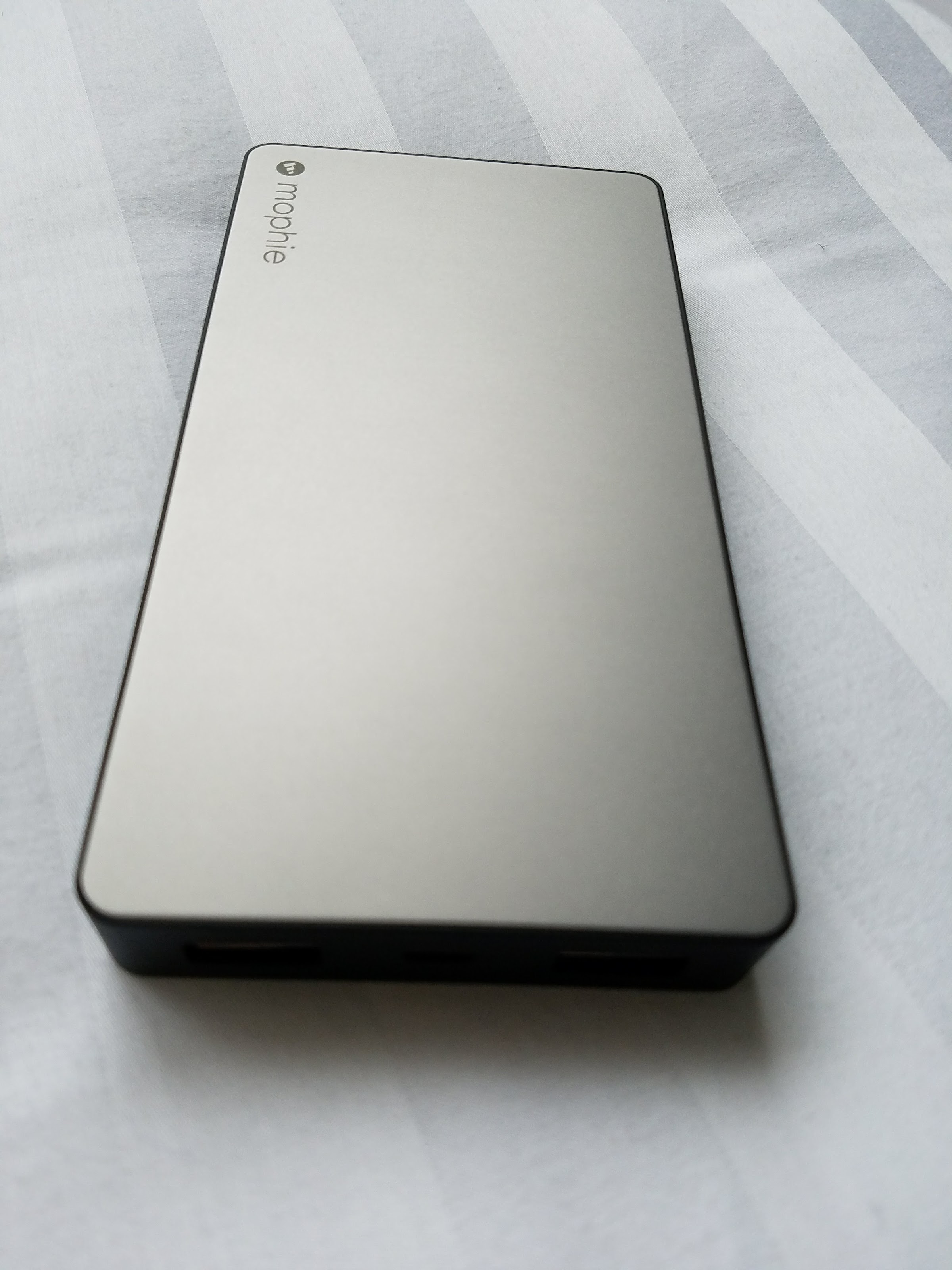 mophie powerstation – I’ll be drained of all my power (or on a super runner’s high) and I’m sure my phone will be, too. The mophie will come in hand when I am trying to snap photos or call to check in on the kids (and tell them how great the day goes). With battery backup that lasts up to four charges, Greg and I both could charge our phones while getting our fill of post-race yums. (Note – if you are a “house divided” and one of you has an Apple and the other a Samsung, you’re in luck as this charges both!) 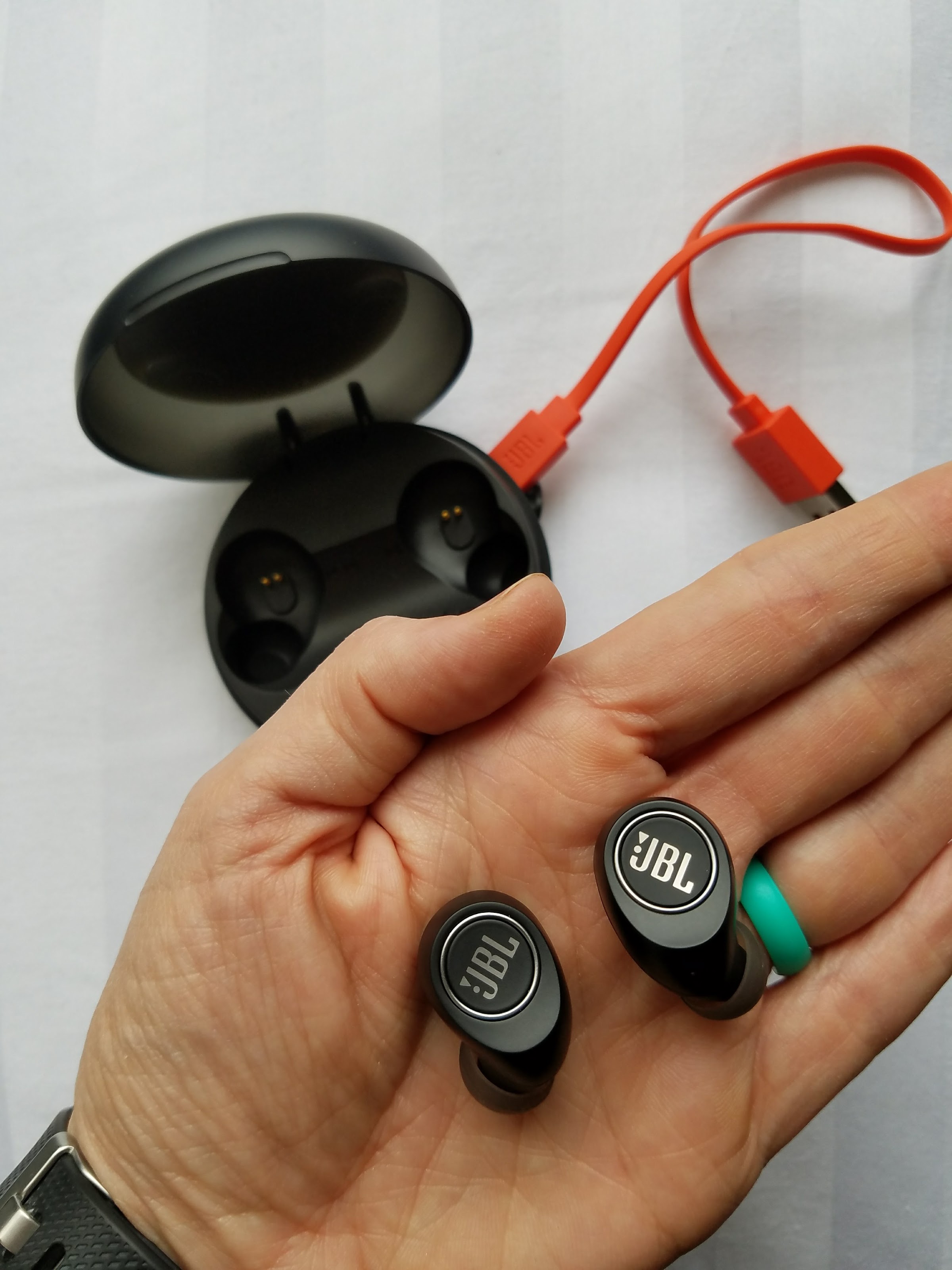 JBL Free wireless in-ear headphones – Ok, these might be in my ears (or ear, I have been running with just one for safety and it still works great), but the case will be in the bag for safe keeping post-race. These headphones are splashproof so they joined me on some of my snowy and rainy runs this training season. The sound is incredible – maybe almost too much because I couldn’t hear outside noises while using them!

(Note – the Pittsburgh Marathon Course recommends against wearing headphones. I’ve never run a Pgh event with them in because the bands are awesome, but I’m not ruling out the idea of wearing one bud this year.)

While running usually just requires your feet and a good pair of shoes, there are some things we tech-crazed people can’t live without! What technology do you use to make your life easier?